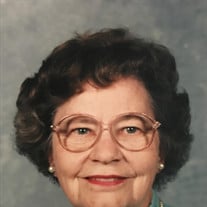 Alice Emilie Riechman Noggle, 95, of Oak Ridge, passed away peacefully on January 3, 2021, with family at her bedside. She was born on January 18, 1925, near Irvington, Illinois, to Louis and Nora Hake Riechman. She attended the University of Illinois, completing a BS in Home Economics in 1948, the second in her family to receive a college education. While in Champaign, IL, she met and married Thomas S. Noggle after his return from the Pacific Island-hopping campaign of WWII.

After completion of Tom's PhD, the couple, with their first two children, moved to Oak Ridge in 1955. Alice fell in love with the verdant hills of East TN and felt forever that this was her home. As she raised four children, Alice was very active in the OR community; she served as Brownie Leader and Assistant Girl Scout Leader, as well as on the Board of several Oak Ridge service organizations, including the Art Center Guild, Arts Guild, and the American Association of University Women, which she joined in 1956 and had been a lifetime member. She enjoyed hiking the TN mountains with fellow ‘Happy Hikers', sailing on summer afternoons at Concord Yacht Club, and playing cards in the evenings in Bridge Club. She and Tom were active members of the Oak Ridge Unitarian Universalist Church, enjoyed square-dancing with the Rambling Rebels, and were members of the Knoxville Gem and Mineral Society. Alice was a longtime volunteer at the American Museum of Science and Energy, working Friday afternoons at the Information Desk for over 38 years. In all of her activities, Alice established many close friendships that lasted a lifetime.

In 1968-69, Alice and family spent a year in Germany where Tom worked at the Kernforschungsanlage (KFA) Julich. It was here that Alice formed life-long friendships with many German families; she especially enjoyed hosting dinners for foreign guests and visiting scientists. Like many of her generation, she was an excellent cook, and was known for her desserts, such as apple and cherry-rhubarb pies. It is with a great deal of sadness that we mark her passing. She was a gentle soul, a friend to all, an inspiration to many, and had a warm and welcoming heart.

The family would like to extend heartfelt thanks to devoted caregivers, Georgia and Venus, who provided Alice with loving care and friendship for many years.

Due to COVID-19, a Memorial Service will be held at a later date. A small, private graveside service and interment will be held on Saturday, January 16 at the Oak Ridge Memorial Park. In lieu of flowers, donations may be made to Alzheimer's Tennessee, or to the charity of your choice. Arrangements by Martin Funeral Home of Oak Ridge.

To order memorial trees or send flowers to the family in memory of Alice Noggle, please visit our flower store.