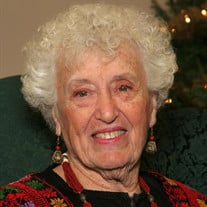 Obituary for Bess Bella Carroll born March 15, 1922-died October 14, 2018.
Bess was born in Brooklyn, New York on March 15, 1922, the daughter of Hyman and Fannie Martel,
immigrants from a small village in the Ukraine. The family held education as a critical value and
Bess was the first to graduate from Brooklyn College. In 1941 she married Joel Carroll, who was the
brother of her childhood friend. During the war they lived in Denver, CO and Washington DC with
their first two children, Robert and Bonnie. After the war, the family settled in Bellmore on Long
Island, NY and Nancy was born.
Bess was an elementary school teacher in Denver, Washington and ended her career as a first grade
teacher at a private Jewish day school in Great Neck, New York where she was recognized as one of
their prized teachers. After retirement, She and Joe moved to Oak Ridge, Tennessee to be near
daughter Bonnie and husband Roy Cooper.
They may have retired from their jobs, but not from their lives. She and Joe were world travelers, and
loved regaling their stories of trips to Europe, the Middle East, Asia, and Africa. While living at
Greenfield in Oak Ridge, pictures of her travels always pleased all the staff and visitors in her room.
Bess also had a penchant for the Arts. She was a community theater actress in her early years and over
the years she created many pieces of sculpture which grace the homes of family and friends. She was
an active member of the Oak Ridge arts community and participated in the Art Center and in ORCMA.
She was also an active life-long learner, taking advantage of everything (almost) ORICLE had to offer.
After the death of her husband, Bess continued to be active in the Oak Ridge community and developed
a special friendship with Leon Morse until his death a few years ago. She moved to Bethesda MD for
two years to be near Nancy. There she met Kofi Konadu, who became her care giver and companion
as she aged. Kofi moved to Tennessee with her in 2014. He became part of the family and, with
Bonnie, cared for her until her death.
Bess was the oldest of four siblings. Her brothers Julius (married to June) and Bill (married to Rhoda),
and her sister Mabel (married to Julius, still living in Rochester, New York), all pre-deceased her.
Bess and Joe had three children. Bess is survived by Robert who married Susan, and they had Bess's
first grandson, Josh. They all live in Los Angeles, California. Bonnie married Roy Cooper. Bonnie
founded and ran Information International Associates here in Oak Ridge until March of this year. They
live in Oak Ridge, Tennessee, and Alexandria, VA. Nancy Carroll Scheiner, Bess and Joe's youngest
daughter, died in 2012 She was married to Stanley Scheiner and had two children, Danny (now living in
Tennessee) and Matey (living in Washington, DC.)
Bess and Joe were beloved and active members of the Oak Ridge Community as they lived in their
home and later Bess in a retirement center (Greenfield). Bess will be buried next to Joe in the JCOR
Cemetery which is in the Oak Ridge Memorial Park.
Funeral services will be held at the Martin Funeral Home in Oak Ridge. Receiving of Friends will be
on Wednesday October 17
th
at 1:30pm followed by a Memorial Service at 2:00pm and then internment
following the Memorial. In the Jewish tradition, the family asks that instead of flowers donations be
made to the ORCMA, ORICLE, or the charity of your choice
Online messages may be left for the family at www.martinfuneralhomeoakridge.com . Services entrusted to Martin Oak Ridge Funeral home 865-483-4341

To order memorial trees or send flowers to the family in memory of Bess Carroll, please visit our flower store.